Smart communities: a win–win for all grid players?

As the electricity sector is revolutionised by new distributed generation and storage, can all the players survive? Is it possible for everyone to win? 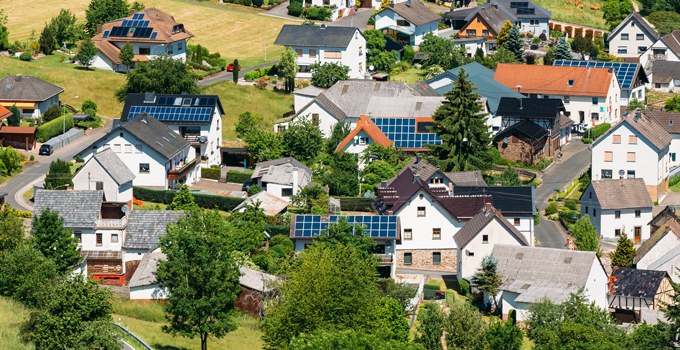 The possibility of the death spiral of the grid and how it can survive the challenges of distributed generation and storage have previously been discussed by my Entura’s Donald Vaughan.

We believe that a grid, in a slightly different shape and form, is essential for the future of the electricity industry . And, if we get it right, this should be good news not only for electricity utilities, generators and retailers, but also for consumers and their communities.

The electricity sector is on the threshold of a new era. In the same way that the introduction of digital cameras and mobile phones turned photography and telephony inside out and upside down, the electricity industry is being shaken up by a major new paradigm in which local generation, storage and bi-directional power flows in the network are blurring the boundaries between the key, discrete players in the traditional grid.

The traditional players – generators, transmission and distribution providers, retailers and consumers – are giving way to hybrid concepts such as ‘gentailers’ and ‘prosumers’. And new ‘smart’ technologies are giving consumers greater control over their timing and level of power demand.

At the same time, the grid is still required to be able to provide all the energy needed to support maximum demand, and that’s expensive. It’s like buying four cars for a family of four, just because once a year they might all be needed at the same time.

But, if consumers leave the grid, they will find it expensive to install enough solar panels and batteries to meet their own maximum demand and cover periods of cloudy, cold weather. They’ll be footing the bill for their own ‘four cars’, with no way to share the costs.

Moving towards a shared energy vision

A workable, clean and affordable solution that benefits consumers but also helps the grid escape the death spiral may be to produce renewable energy locally, but in a controlled fashion, complementing grid operation. Let’s call this a ‘smart community’.

The smart community might be a group of consumers within a geographical area such as a suburb, who, while still connected to the main grid, generate and store a proportion of their own power through distributed renewable generation, and use smart technologies to manage their devices and control their power usage to get the best value from their own power infrastructure.

This community can trade energy, not just between individuals, but also among other groups of consumers, or with the main grid itself. They will utilise the grid efficiently, through demand control and embedded generation control, and even support the grid in times of need, and charge for that service.

In this scenario, the grid provides any extra power these communities may need and gives them a sharing mechanism, but the opportunity to participate in the energy market gives the smart community more ‘bang for the grid-charges buck’. Neighbours and communities can share their own locally produced and stored energy and trade it in the energy market when the price is right – increasing the amount of clean and affordable renewable energy in the power mix, helping to democratise the energy system, and keeping some of the sector’s profits within the community.

But this win for the community does not have to come at the expense of the grid. Instead, the grid still benefits through less capital works required to manage total demand, because the smart community demand is capped by smart controls. And the smart community can also operate as a ‘virtual power plant’, providing generation or back-up to the grid at times when the community’s generation is greater than its demand.

For electricity retailers, distributors and other players in the electricity sector, providing this kind of ‘smart’ service to communities interested in taking more control of their energy generation, storage and use opens up a potential new revenue stream in the changing electricity market – and it is an opportunity still up for grabs.

What makes smart communities possible is a ‘smart community controller’ for rapid demand-side response and sub-second control of loads.

As part of Hydro Tasmania, Australia’s largest renewable energy generator, specialist power and water consulting firm Entura contributed to the design and development of the controller that has been used successfully in the King Island community since 2013. The super-fast demand control system helps to keep the King Island power system at high levels of renewable penetration, by subtly managing customers’ power loads.

For example, during sudden, short drops of wind power, hot water boilers across the island are turned off for less than a minute. This reduces the total load and prevents the need for a conventional generator to start up, maintaining high renewable penetration – and customers don’t even notice the difference.

And, in the reverse scenario, if there is a surplus of renewable energy, it may be possible in future to offer it to customers at lower rates rather than spilling it. This is especially valid if storage is available.

This advanced control technology is also helping other remote communities (such as the Pacific island of Yap) balance their power demands to maximise their use of locally generated renewable energy when these sources are available.

So, enabled by very clever technology, this model of a smart community really does work. And, if developed further, promises to be a win–win for all participants in the grid.

To discuss how Entura can work with you to implement the smart grid technologies that underpin successful off-grid, hybrid, remote area, or smart community developments, contact Akhil Pai on +61 406 874 101 or Silke Schwartz on +61 407 886 872.