With energy reliability a hot topic in Australia, eyes are now turning to pumped storage hydropower… but what has been holding it back? 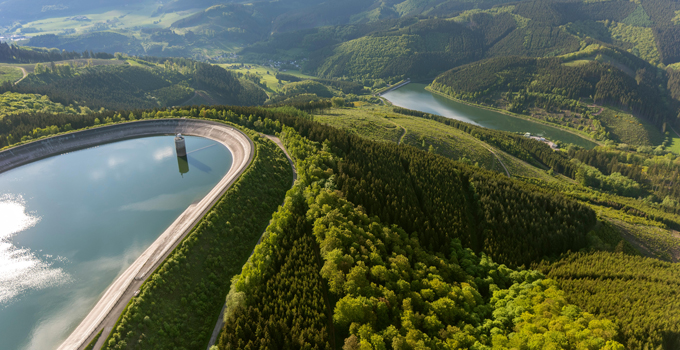 Around the world, pumped storage hydropower projects make up the vast majority of grid energy storage and have traditionally been used by energy utilities to supply additional power to a grid during times of highest demand.

As part of a portfolio of power stations, a utility might operate a pumped storage project infrequently only, if the cost of pumping the water back to the upper storage exceeds the revenue that can be generated from its release.

The main issue facing developers trying to prove the viability of a new pumped storage project is that a sufficient price differential is required to pay for the pumping and to account for the efficiency losses in transmission, pumping and generation. The generation price needs to be sufficiently higher than the pumping price just to repay the variable pumping costs. To repay the heavy capital investment, a margin is required over and above the break-even cost of pumping. This is particularly true where proposed developments are ‘stand-alone’ and cannot be optimised as part of a corporate generation portfolio.

In recent years, electricity price spikes have been irregular with few occurrences each year. Due to the significant capital costs, a pumped storage scheme would require a certain number of pumping/generation cycles at high or maximum pricing to pay a return on investment. These price spikes are unpredictable, so building a business case around these events is risky.

Historically, the daily fluctuation of power prices has not been sufficient or regular enough to attract pumped storage developers. This is beginning to change with increasing penetration of renewable energy leading to an increase in both low and high price periods. More frequent, sustained periods of hot weather (as predicted by climate change models) will also drive up demand for power and therefore the market price.

In the last few months, volatility has greatly increased, creating a greater differential between baseload and peak pricing. This will increase the viability of pumped storage schemes, although the unpredictability and challenges of financing capital intensive assets will remain.

But, even when the economics are right, there are still some other barriers that proponents of pumped storage projects need to overcome:

Pumped storage projects require significant capital for development. Minimising the cost of construction and operation is key to the successful development of a project. Choosing the right location is a matter of identifying a site with ideal topography, a source of water and good proximity to and location within the transmission network.

While a pumped storage project generally has a significantly smaller footprint than a traditional hydropower project, the features of natural topography that are ideal for pumped storage – high, steep hillsides or cliffs – tend also to be places of great natural beauty and are often designated as reserves, are expensive private land, or have high environmental or social value.

State governments can assist here through streamlined planning and approvals processes for infrastructure developments. This can make sure that the challenges of developing sites do not become insurmountable for developers.

If the impacts of a project can be mitigated to the satisfaction of the relevant regulatory body and international Standards (such as the International Hydropower Association and International Finance Corporation), a pumped storage hydropower project should face no greater hurdle than any other infrastructure project in this respect.

Inconsistent and uncertain policy positions of the major political parties at both federal and state levels reduce confidence in the energy industry, which deters investment. With debate raging over energy security, a bipartisan view on energy policy, which transcends party politics and the electoral cycle, is urgently needed.

Existing mechanisms are in place to support the renewable energy industry. The Renewable Energy Target (RET) promotes investment in renewable energy projects; however, pumped storage is specifically excluded from the RET where the energy used for pumping exceeds the energy generated. Current policy would have to be amended or complementary legislation enacted in order to reward large-scale storage for the service it provides.

Such changes could include market mechanisms for large-scale storage that could offer incentives for providing inertia and ancillary services from storage at times of peak demand as well as power. Another possible change could be to ensure that large-scale storage asset owners are not penalised under the RET for energy used in the pumping process. This would encourage the development of energy storage as a complement to the growth of renewable energy.

The long lead times and high development costs of pumped storage projects are major deterrents to developers. Projects generally take more than 4 to 5 years from the point of conception to ‘power on’, and require millions of dollars of capital for development and hundreds of millions for construction. In other words, when funding is first committed, it may not see a return for five years or more.

In an effort to overcome this barrier, the Australian Renewable Energy Agency (ARENA) has indicated it will allocate at least $20 million to finance the accelerated development of flexible capacity and large-scale storage projects. The Clean Energy Finance Corporation (CEFC) has also committed to provide successful ARENA funding recipients with the opportunity to secure long-term debt finance to support their projects.

With an increasing interest and emphasis on storage in a power system that is becoming increasingly unreliable (e.g. load shedding in South Australia and lack of reserve events in New South Wales), and with finance from ARENA and CEFC for large-scale storage, the barriers to pumped storage development are gradually diminishing. This action can’t come soon enough for residents suffering through blackouts on days over 40°C.

A version of this article has been previously published as an op-ed in the Adelaide Advertiser.

Nick West is a civil engineer at Entura with 16 years of experience, primarily in hydraulics and hydropower. Nick’s skills range from the technical analysis of the layout of hydropower projects to the preparation of contractual project documents and computational hydraulic modelling. Nick was a key team member of the Kidston Pumped Storage Project Technical Feasibility Study and was involved throughout the development and construction of the Neusberg Hydroelectric Project in South Africa. Nick has successfully completed projects ranging from hydraulic design for small residential developments to the feasibility study of a cascade of four large hydroelectric projects in Malaysia.

Richard Herweynen is Entura’s Principal Consultant in Civil Engineering. Richard has 27 years of experience in dam and hydropower engineering, and has worked throughout the Asia-Pacific region on both dam and hydropower projects. Richard was the Project Director of the Kidston Pumped Storage Project Technical Feasibility Study and, in recent years, Richard has led the design of three roller-compacted-concrete dams within Australia and a number of significant dam upgrades. Richard was part of the ANCOLD working group which updated the guidelines for concrete gravity dams, and is the Chairman of the ICOLD Technical Committee on Engineering Activities in the Planning Process for Water Resources Projects. Richard has won many engineering excellence and innovation awards, and has published over 30 technical papers on dam engineering.