Entura has helped the Cook Islands achieve another milestone in its push to reduce reliance on diesel fuel and move towards the country’s renewable energy goals.

The Cook Islands is a group of 15 small islands in the Pacific, to the north-east of New Zealand. Entura is working towards enabling the conversion of the power supply of six southern islands of the 12 inhabited islands in the group from mainly diesel generation to solar/battery hybrid systems that will supply 100% of the populations’ energy needs.

The solar/battery hybrid project on the island of Mangaia, the third of the six southern islands, is now operational and was officially opened last week. Mangaia can now switch off its diesel generators and run entirely on clean and reliable solar and battery power thanks to its new hybrid renewable power system. A similar plant in Mitiaro opened in May, followed by another in Atiu in August.

Hybrid energy projects on another southern island – Mauke – will be completed over coming months, followed by a range of other initiatives on a further two islands, Rarotonga and Aitutaki, which have higher power demands. Power systems there will be upgraded to increase levels of renewable energy generation and provide control systems and battery storage technology to manage high levels of renewables. 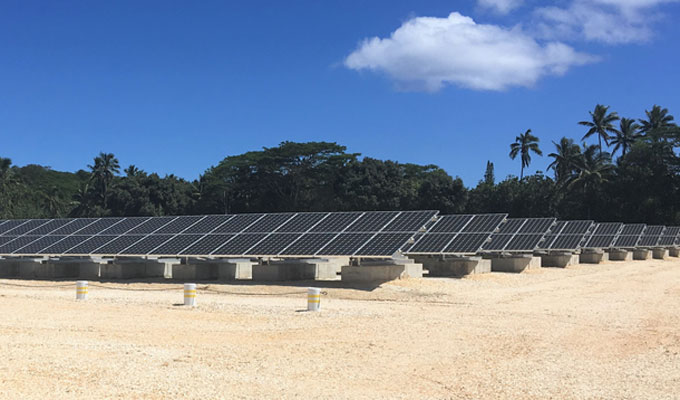 “Energy security and self-sufficiency are essential for remote and isolated locations such as the Cook Islands,” said Entura’s Managing Director, Tammy Chu. “Diesel fuel remains the single largest expense to generate power on many Pacific islands, so using renewable energy makes good economic sense as well as reducing carbon and other emissions.

“Enabling safe and sustainable renewable power developments that make a positive and enduring contribution to communities is very important to us, and we are pleased to bring our expertise to assist our Pacific neighbours with their renewable energy journeys,” said Tammy Chu.

Along with the similar systems previously completed on six Northern Group islands, Entura’s work with the six southern island projects will achieve significant progress towards the Cook Islands’ target of 100% renewable energy by 2020.

“The commitment to renewable energy is a fundamental prerequisite for sustainable development,” said Tangi Tereapii, Director of the Renewable Energy Development Division of the Cook Islands Government.

“It also underlines the Government’s commitment to addressing climate change, preserving the country’s pristine environment and ecosystems, and strengthening the level of energy security which is a foundation for sustainable economic growth.

“The Cook Islands Government recognises the professionalism of the partnership with Entura, which ensures that these projects are implemented in a way that blends our islands’ culture and mana [power].”

Funding for the Cook Islands projects comes from multiple funding streams providing great experience dealing with different donors and different rules. The funding streams include an Asian Development Bank loan of NZD12.98 million, a European Union Grant of €5.3 million, committed funding from the Global Environment Facility of USD4.1 million, a product grant from the Pacific Environment Community of USD3.9 million, as well as a government allocation for dedicated resources and land compensation.