Entura delivers on the Agnew Hybrid Renewable Project, despite COVID-19

Entura has completed the design, delivery and commissioning of a microgrid control system for the Agnew Hybrid Renewable Project in remote Western Australia, despite the challenges of keeping its people safe and complying with travel and quarantine restrictions during the COVID-19 pandemic. 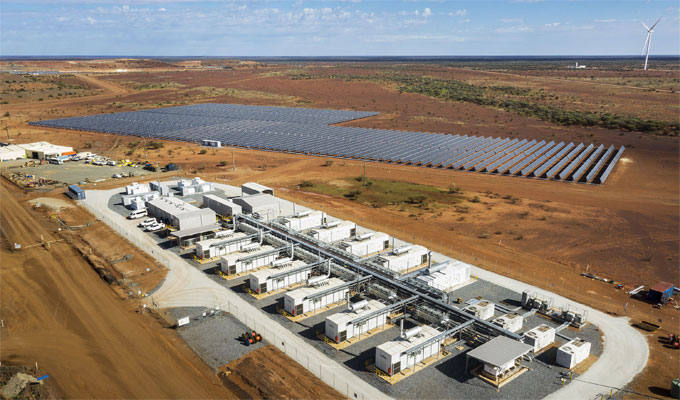 The Agnew Hybrid Renewable Energy Project, owned and operated by energy producer EDL, powers global mining company Gold Fields’ Agnew gold mine through a combination of solar and wind generation, battery energy storage, and gas and diesel generation. It is the first of its kind in the mining sector in Australia, and certainly the largest.

The role of the control system, delivered by Entura, is to coordinate all of the power system elements to maximise the amount of renewable energy used and to ensure the system remains stable.

“The control system is key to achieving the renewable contribution target: without a control system to coordinate all the pieces, it’s impossible to push significant renewables into the microgrid and maintain power quality,” said Ryan Willems, a Senior Renewable Energy Engineer at Entura.

“The control system calculates set-points for the solar, wind and battery systems depending on system conditions and how many gas generators are online, managing the renewables and battery around what the thermal power station is doing.”

At a critical stage of the project, Hobart-based Ryan needed to be safely returned home from the distant and remote project location to Tasmania due to COVID-19 travel restrictions and Entura’s commitment to the safety of its workers.

During a fortnight of mandatory isolation, Ryan was able to remotely commission the control system – a highly unusual method of operation, but a successful and safe compromise that ensured that the project could remain on track.

“Our previous hybrid renewables projects have resulted in Entura achieving several world-firsts for microgrids, so it’s always exciting to be pushing the envelope of what’s possible at the forefront of the industry, even from a desktop in a hotel room rather than out on site,” said Ryan.

“The Agnew project demonstrates another significant advance in Entura’s hybrid journey as we’ve tackled the major challenge of integrating gas engines, which have higher minimum load requirements and slower response times than the diesel engines, so they present more complexities for system integration.”

The Agnew project is now operational and is demonstrating that reliable supply can be achieved with a significant contribution from variable renewable sources. The target of supplying over half the mine’s energy demand from renewable energy has already been exceeded at times, with 70% having been achieved in favourable weather conditions.

“We are delighted to have been able to ensure the safety of our personnel while still continuing to effectively support our valued client EDL to deliver this important industry-leading project despite the challenges of the coronavirus pandemic and its impacts on our usual work practices,” said Tammy Chu, Entura’s Managing Director.

“The Agnew project is an outstanding result for EDL and Gold Fields, and sets an inspiring benchmark for the mining industry, demonstrating that it is possible to transition to a lower carbon future by maximising renewable energy while maintaining energy reliability and stability.”

Entura was also engaged to provide power systems modelling and protection system studies for various parts of the project.

“Entura has enjoyed the close working relationship that’s formed among SMA, Goldwind, Cummins and EDL, which allowed the successful combination of the equipment both in the modelling space and now also so successfully in the physical environment of this far-from-ordinary microgrid,” said Donald Vaughan, Entura’s Principal Consultant in primary electrical engineering.