Global declines in water storage are increasingly troubling. With greater hydrological variability due to climate change, more storage will be vital to provide the same level of security of water, food and energy. 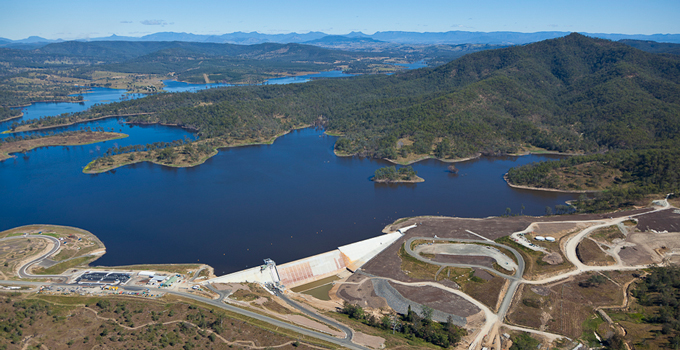 Water storage is a fundamental protection from the impacts of a changing climate, safeguarding the supply of water, and the water–food–energy nexus, even during extended drought.

These days, many dams serve more than one function, but remain the primary mechanism for coping with the variability of water supply and demand. During the last century, more than 45 000 dams higher than 15 m have been constructed worldwide, creating a combined storage capacity estimated to be between 6700 and 8000 km3, representing 17 per cent of global annual runoff.

Security of water, food and energy are inextricably linked. For example, approximately 50 per cent of all large dams worldwide are used for irrigation. Without sufficient water storage, irrigated agriculture (the largest user of water at the global level, contributing 40 per cent of the world’s food) is at the mercy of changing patterns of rainfall and runoff.

Understanding water storage issues is essential for successfully managing water resources. At the simplest level, it is a matter of ‘inflow (water supply) less outflow (water demand) equals change in storage’. But it is particularly important to understand whether storage declines relate to reducing supply, increasing demand, or both. The answer is both, and more.

Key factors influencing storage are greater variability of inflows due to climate change, increased demand due to population growth, reduced net storage due to sedimentation, and less dam construction occurring worldwide due to environmental and social impacts.

The effects of climate change are predicted to increase and to result in greater magnitude and frequency of hydrological extremes, such as prolonged droughts and significant floods. With prolonged drought, inflows to storages will reduce. If demand remains the same, stress on existing water storages will increase.

It is estimated that in 2017 Earth supports around 7.5 billion people, yet 200 years ago the number was less than 1 billion. Population and water demand are strongly linked. With our world population increasing at around 80 million people per year, rising demands for basic services and growing desires for higher living standards will intensify the demand for water and put additional strain on existing storages.

Many of the larger reservoirs worldwide have had their lifespans reduced significantly due to deposits of sediment within the storages, diminishing net storage in many regions of the world. Globally, the annual rates of loss relative to installed storage capacity are generally estimated to range between 0.5 and 1.0 per cent, equating to a total worldwide loss of storage of around 40 to 80 km3 per year.

With less dam construction, some decommissioning of older dams and loss of storage due to sedimentation, net storage worldwide is falling, most dramatically in storage per capita. Such reduction in storage is likely to undermine reliability of supply. 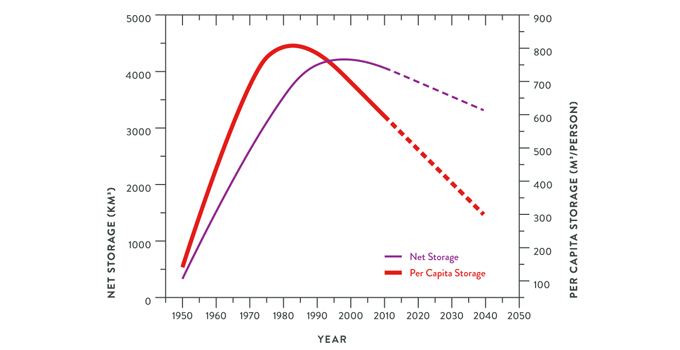 Few kinds of development projects arouse as much controversy as dams. However, large dams vary considerably in their environmental and social impacts. The severity of environmental impact is largely determined by the dam site. While dams at good sites can be very defensible from an environmental standpoint, those proposed at bad sites will be inherently problematic even if all feasible mitigation measures are properly implemented. The challenge is to find the good dam sites to enable these necessary water storages to be developed.

How can we take action?

The following actions form a useful response to reduced worldwide storage and the pressing need to increase water storage to maintain reliable water supply, irrigation and energy systems in a changing climate:

The net decline in global reservoir storage demands a different mindset for analysing the economics and construction of sustainable dam projects. Rather than debating whether more dams are required, decision-makers must accept that more storage will be needed and should plan accordingly.

If you would like to find out more about how Entura can help you develop a sustainable water storage solution or respond to these worldwide challenges, contact Richard Herweynen on +61 3 6245 4130 or Shekhar Prince on +61 412 402 110.

A version of this article has been previously published in the International Hydropower Association blog.

Richard Herweynen is Entura’s Principal Consultant in Civil Engineering. Richard has 27 years of experience in dam and hydropower engineering, and has worked throughout the Asia-Pacific region on both dam and hydropower projects. Richard was part of the ANCOLD working group which updated the guidelines for concrete gravity dams, and is the Chairman of the ICOLD Technical Committee on Engineering Activities in the Planning Process for Water Resources Projects. Richard has won many engineering excellence and innovation awards, and has published over 30 technical papers on dam engineering.