Getting hydropower right: The six key considerations for a successful project

So, you want to develop a hydropower project? Any hydropower development is a major undertaking, so you need to be sure you get it right.

In our increasingly electricity-dependent world, hydropower offers a cost-effective and environmentally sustainable, clean-energy solution with significant development opportunities in Asia and Africa particularly.

Solving the technical challenges to establish a reliable hydropower scheme may seem complex, but engineering issues are only one part of the equation and may even be relatively straightforward compared with some of the broader issues and risks affecting a project’s success or failure.

Hydropower developments are more likely to gain social and regulatory approval, adequate and secure finance, and be successful in the short and longer term, if you pay early and detailed attention to the following six key considerations. 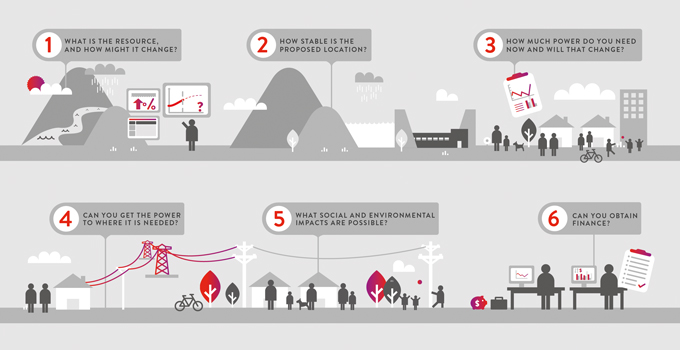 1 – What is the resource and how might it change?

Properly investigating the long-term history and variability of an area’s water resource is essential to the success of any hydropower project. However, even in areas in which water availability may have been reasonably consistent in the past, climate change introduces a new level of uncertainty for future projections.

To maximise the success of a new hydropower development for the short term as well as long into the future, it is essential to build climate resilience into projects. This requires specialist hydrological modelling based on the best historical data combined with expert future projections, taking into account the range of potential impacts on climate, rainfall, inflows and water availability.

Climate effects may not always mean reduced water availability. In some cases, the hydropower scheme may need to be able to accommodate and optimise the use of increased rainfall or inflow.

However uncertain the future resource, thorough investigation of what is currently known and what can reasonably be projected gives you the best chance of a successful, climate-proof scheme that can withstand future inflow variability and other longer term changes in the catchment.

2 – How stable is the proposed location?

One of the greatest potential complications and causes of delay in a hydropower development project is an unwelcome geological surprise.

Thorough, specialised investigation of the proposed site’s topology, geology and seismic risk is crucial, and can greatly impact cost, financing and viability. The more stringent and detailed the preliminary geological and geotechnical investigations, the more likely you are to avoid problems through the construction period and deterioration of the infrastructure over time.

This is particularly important where a large dam is proposed, as the extra weight of the water, concrete and sedimentation creates massive forces on the dam’s foundation, which may cover a large area and a potentially geologically diverse set of subsurface conditions. The choice of the appropriate dam type and construction method must be influenced by the unique conditions of the dam site, and stability of the site is a key consideration.

3 – How much power do you need now and will that change?

Populations and their demands for power don’t stay static for long. It’s important to think about the broader demographic of the region in which your scheme is to be developed. Is the population growing rapidly due to an ongoing rising birthrate, or could it shift significantly due to changes in neighbouring regions creating population movement?

Furthermore, industrial demand needs to be carefully projected, especially in a growing economy. What is the future development potential of local towns or cities? Is there potential for any major new industry in the region that may rapidly increase the power demand? On the other hand, are there any foreseeable threats to existing major industries that may suddenly lower demand?

As technology and lifestyle expectations change, especially in developing nations, residential demand may also rise rapidly. This demand can also be significantly, although usually predictably, variable, such as where climate extremes create peak demand coinciding with heating or air-conditioning requirements.

Another important factor, particularly in Asia and parts of Africa, is the potential for power generated in one country to be sold to neighbouring countries.

4 – Can you get the power to where it is needed?

A power source is only useful when it can reach a potential user. So another key consideration for a successful hydropower development is the ability to deliver the power to where it is needed through existing, upgraded or new transmission and distribution infrastructure.

Commonly, the best economic outcome of a power development is when much of the load can be used near to where it is generated, as this lowers the costs of transmission development, and lessens the loss of power when it is transferred over distance. Those few percentage points of power loss over distance could make the difference in the overall financial return on investment.

Careful planning of the routes for transmission and distribution lines is critical to success, with sizeable implications for project costs if lines must cross remote or rugged terrain, or socially or environmentally sensitive areas.

5 – What social and environmental impacts are possible?

From the earliest thoughts and discussions about a new hydropower development, it is critical to consider the project’s stakeholders, community and environment. As well as providing benefits to a project’s owner, electrification can deliver significant benefits to affected communities, raising living standards, alleviating poverty, helping to develop and diversify economic activities, as well as potentially improving water availability and management. However, hydropower should never be developed to the detriment of affected communities or the environment.

A ‘social licence to operate’ is fundamental to long-term success of your hydropower project. This can only be achieved where due consideration is given to social and environmental impacts throughout the project lifecycle, including those around changes in land use and ownership, and adequate consultation and engagement is undertaken with affected communities so that they receive a net benefit from the project.

Stakeholder engagement is the key to determining appropriate avoidance, mitigation, offsetting or compensation of any potential impacts – both immediate impacts, and impacts that may only emerge in the longer term. The most successful consultation is the ‘bottom-up’ and transparent approach, where affected communities are engaged and involved in the project right from its inception.

Safety is also a critical issue to be managed throughout a project’s life, including the safety of construction workers, ongoing employees, and the broader community. Identifying key safety risks early and managing them appropriately throughout design, construction and ongoing operation is critical to protecting a developer or owner against the major social and environmental consequences of a safety incident, as well as the long-term damage to that business’s reputation and financial viability.

6 – Can you obtain finance?

No hydropower project will succeed without available, secure project financing. Although hydropower developments offer opportunity to developers and financiers, lenders around the world are increasingly cautious and will require evidence of best-practice and sustainability to release project funds. They will need a range of risks to have been adequately investigated and mitigated, including all those considered above, as well as local political and regulatory issues.

A useful tool to evaluate the sustainability and strengths of a hydropower project and identify any further opportunities for risk mitigation is the Hydropower Sustainability Assessment Protocol.

Using a framework such as this offers investors greater confidence that their investment is safe, and that structured and systematic efforts have been undertaken to foresee risks across the spectrum of financial, technical, stakeholder, community and environmental issues.

Although not all risks can be avoided, this is the closest we can reasonably get to being confident that the project will not encounter any significant delays or problems through its lifecycle and will deliver the social, environmental and economic benefits it promises.

To discuss how Entura can help you plan and deliver a successful hydropower project, please contact Shekhar Prince on +61 412 402 110.