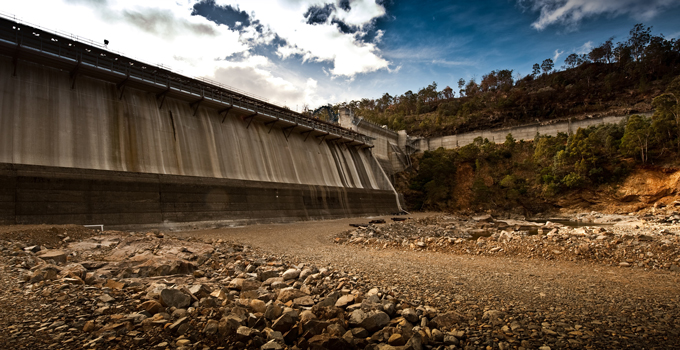 Around the world, businesses and communities face the many risks of climate change such as higher temperatures, changes in water availability and rainfall, more frequent and severe weather events. For power and water businesses, these may lead to major infrastructure damage and financial and environmental consequences.

Entura supported Hydro Tasmania’s response to this major climate-related challenge through a range of earlier best-practice resilience-building measures, and significant interventions across a range of areas during the crisis itself.

Although Hydro Tasmania had experienced some variability in the past in Tasmania’s climate patterns, and despite understanding the risk of increasing future climate variability, the extreme dry conditions of September 2015 to April 2016 were unseasonal, unexpected and unprecedented. In Tasmania, summer inflows are traditionally low, but in this case, the usually dry summer was preceded by record-low spring inflows. Below-average rainfall across both spring and summer was the lowest recorded in 50 years. 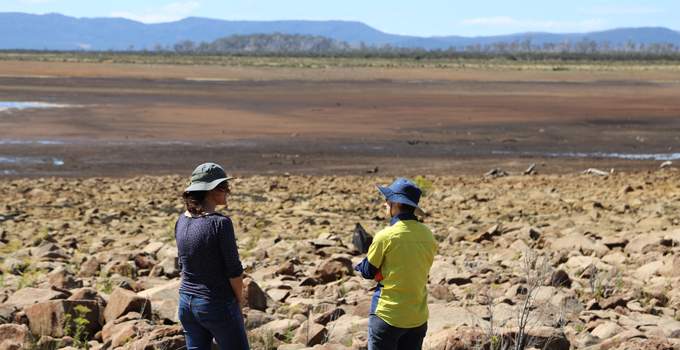 In normal operating conditions, low inflows could have been mitigated by importing power from mainland Australia across the undersea interconnector cable, Basslink, so that storages could be maintained. Yet, in another unprecedented scenario, in December 2015 the Basslink interconnector became inoperable just as summer arrived. Hydro Tasmania was now no longer connected to Australia’s national electricity market and many months remained before expected autumn/winter rains.

By late April 2016, Hydro Tasmania was experiencing its lowest storage levels ever, down to 12.5% total energy in storage, and serious environmental risks were emerging in some of its sites.

To compound the challenges, in January and February 2016 at least 70 separate fires were listed in Tasmania’s north-west, west, south-west and central highlands. 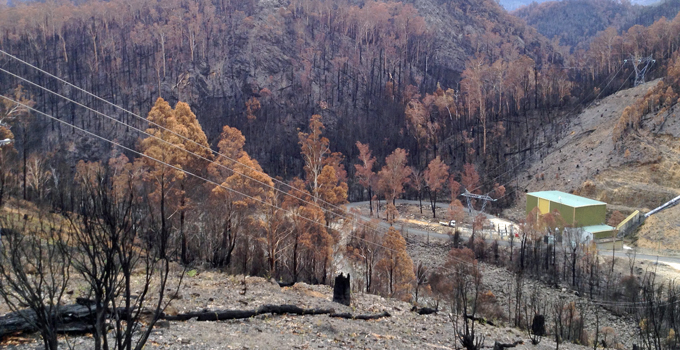 These extraordinary circumstances combined to present Hydro Tasmania with a major operational challenge. How could it keep the lights on and keep businesses operating in Tasmania while also protecting the environmental values associated with water storages and preserving the condition of its assets?

When the drought broke, conditions shifted from one extreme to another. Floods in June 2016 in northern Tasmania hit historic highs, exceeding all previous flood records in many locations. Several river-level measurement stations experienced the highest water levels on record.

How was the crisis managed?

Voluntary reductions in major industrial loads were negotiated, and actions were taken to assess and instigate alternative generation options, such as restoring gas generation and implementing 200 MW of temporary diesel generation to bolster power generation. Entura assisted Hydro Tasmania to identify and assess feasible generation options and sites, and to progress these options through approvals and into operation.

Through these integrated and rapidly executed measures, Hydro Tasmania was able to maintain electricity supply for Tasmania without any outages for domestic users.

Environmental management and multiple water use

Another critical aspect of the successful result drew on Entura’s expertise in environmental management. Environmental impacts were monitored throughout the crisis. Lake-level risk bands were reassessed to better protect water quality and threatened species and to limit the long-term impacts on environmental values. 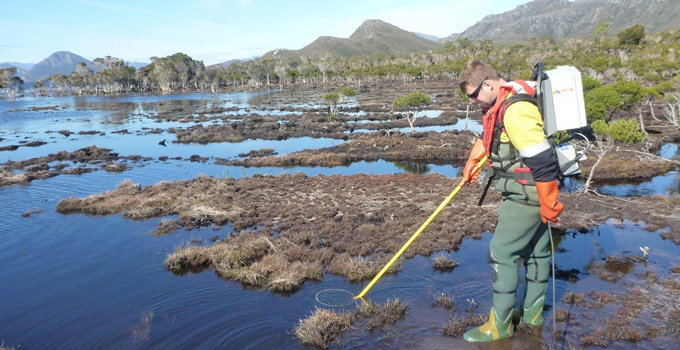 Water management also considered and mitigated impacts on other water users, such as boating, recreational fishing and water supply.

The bushfires experienced across the state during the summer period did not adversely affect Tasmania’s energy security, as Bushfire Preparedness Fire Management Plans were already in place, and were activated to protect individual power stations and key assets through fuel reduction and other measures.

Despite the extreme flood conditions, dams and spillways operated well within their design parameters, indicating that Hydro Tasmania’s ongoing dam monitoring and dam safety systems were robust.  Safety inspections after the floods found only minor damage to non-critical elements of some dams.

During the high rainfall conditions, monitoring of dams and waterways provided alerts to downstream communities.

Another consequence of the flooding was damage to some of Hydro Tasmania’s secondary assets (roads, canals) due to landslips, and the loss of some river-flow monitoring sites. Entura assisted with assessment and rectification of this damage.

Success drew on prior climate-resilience preparation

Ultimately, the example of Hydro Tasmania demonstrates climate resilience in practice. It shows how an investment in climate resilience enables a power and water business to be better prepared, more flexible and more robust in the face of a climate ‘shock’.

Hydro Tasmania’s management of the crisis required a comprehensive understanding of Tasmania’s climate and catchments. Entura’s involvement in 2007 in developing a Climate Change Response Strategy had provided a basis for this understanding, and a crucial input into identifying the risks and opportunities stemming from climate change. 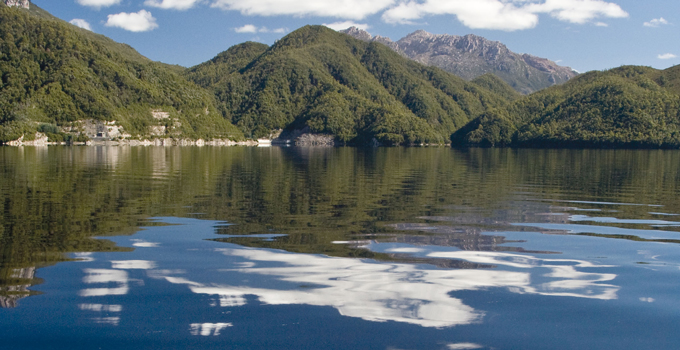 Further inputs for climate resilience came through the collaboration in 2008 to 2010 between Entura and the CSIRO (Australia’s national scientific research organisation) on the first fine-scale climate and river system modelling for Tasmania, through the Climate Futures for Tasmania and the Tasmania Sustainable Yields projects.

The results of that research were state-of-the-art regional climate modelling and hydrological models to project future catchment yields for Tasmania. The modelling indicated that under climate change Tasmania could expect gradual temperature rises, changes in rainfall patterns over coastal regions, reduced rainfall over central Tasmania, changes to run-off patterns, and changes to the frequency and severity of extreme weather events including increased rainfall intensity and floods.

This modelling was critical in enabling Hydro Tasmania to plan and balance generation and storage levels over a range of demand and inflow scenarios and to assess environmental impacts during the extended period of drought.

Another key aspect of managing the energy supply challenges through the drought involved setting up supplementary diesel generation. This drew on Entura’s expertise and extensive involvement in developing hybrid off-grid renewable energy systems.

Hydro Tasmania’s climate resilience also involved being prepared for the drought to break. Key contributions from Entura included flood forecasting and flood support systems, ongoing support of Hydro Tasmania’s dam safety and emergency planning programs, and prior involvement in upgrading dams and designing spillways to withstand predicted increases in the frequency and magnitude of floods. 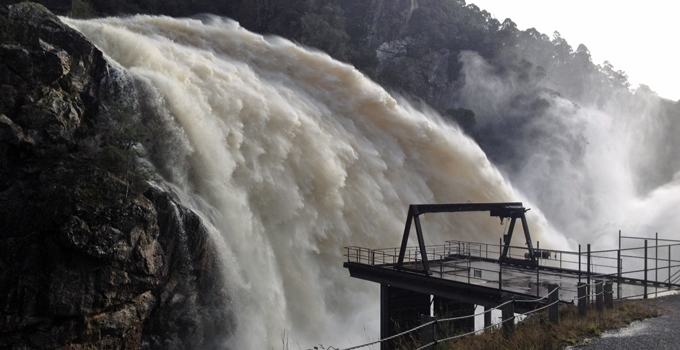 Entura also supported Hydro Tasmania’s procedures and ongoing activities to manage the secondary impacts of the fires and floods (such as damage to infrastructure), as well as the risks posed by low lake levels to social and environmental values. Entura’s environmental scientists monitored threats to aquatic flora and fauna through the 2015/16 crisis. To ensure the least likelihood of long-term or irreversible environmental damage, Hydro Tasmania’s environmental risk bands were revised.

Investing in your climate resilience

Any proactive and sustainable power or water business needs to invest in understanding the range, likelihood and consequences of the potential impacts of climate change for their current and planned systems and operations – whether for hydropower, transmission, dams, irrigation or water supply – and how to avoid or mitigate the impacts.

The more businesses understand the potential impacts of climate change and risks to their projects and operations, the better they can prepare, adapt, and build resilience to climate change impacts.

Tammy Chu is the Managing Director of Entura, one of the world’s most experienced specialist power and water consulting firms. She is responsible for Entura’s business strategy, performance and services to clients, and is part of Hydro Tasmania’s Leadership Group. As a civil engineer, Tammy specialised in the design and construction of mini-hydro and hydropower systems, project management, hydropower investigations, prefeasibility and feasibility studies, environmental assessments and approvals, resource investigations and resource water management. Tammy is a member of the Board of the International Hydropower Association. She was the first female and now past president of the Tasmanian Division of Engineers Australia, and was an Engineers Australia National Congress representative.

Dr Eleni Taylor-Wood is Entura’s Principal Consultant, Environmental and Social Science. Eleni has more than 20 years’ experience successfully managing large-scale, complex projects that run over several years, as well as providing expert advice and independent review for a range of infrastructure and planning projects. She has worked on projects around the world including in Australia, Mozambique, South Africa, Iceland, Colombia, India, Malaysia, Mekong, Solomon Islands, Fiji and Papua New Guinea. Her experience covers a vast gamut of studies including: environmental and social impact assessment and management; strategic management of wetlands and waterway; feasibility and approvals for new hydropower projects, environmental flow determination and assessment, and sustainability assessments. Eleni is currently one of eleven Accredited Assessors under the Hydropower Sustainability Assessment Protocol worldwide.